88
SHARES
38
VIEWS
Share on FacebookShare on TwitterShare on Whatsapp

Nollywood actress and mother of one, Tonto Dikeh is alleged to be facing deportation from Dubai after she was involved in a heated in fight.

Report emanating from Dubai has it that Tonto Dikeh might be deported after she got into a brouhaha with a security guard because she was denied entry into the event center.

According to multiple sources, Tonto Dikeh arrived the event alongside Bobrisky and the security guard refused to grant her entrance. The actress who was allegedly inebriated and intoxicated on an unknown substance attacked the guard and the brouhaha escalated. Police intervened and she was whisked away to an unknown location. 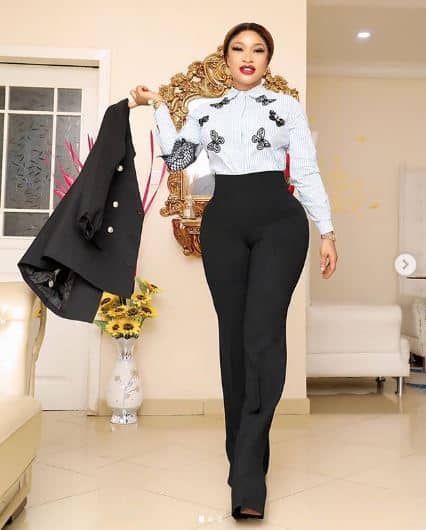 Read the full report from SDK below;

On Friday night (November 15th) at an event in a hotel in Dubai,Instagram drama queen Tonto got into an exchange of words with the security at the entrance and before anyone could say Jack,the brouhaha had escalated into one which involved the Police and arrests being made…

According to sources ,Tonto arrived the venue of the event and the security refused to allow her in while others walked pass her into the event ..Tonto got upset and the sources who say she appeared high on something launched a verbal attack on the security guard and her two friends Timi and Bob shifted to the side when they could not stop her or control her….

She is quoted to have called the white security guard a ”Nigga” while yelling and cursing and asking him if he knows who she is………”Do you know who i am?Do you fvcking know who i am”

When it got out of hand the Police was called in and she was taken away…….

#BBNaija: Teebillz Says Tacha Has Turned Down Many Endorsements, Reveals Why

#BBNaija: Teebillz Says Tacha Has Turned Down Many Endorsements, Reveals Why