Simi Reveals What Happens Between Herself & Adekunle Gold At Home

A fan of Simi and Adekunle Gold recently took to twitter to share her imagination of what happens between the couple when they are together at home.

I just imagined Simi and Adekunle at home. They’d be singing all over the place.

Simi then corrected the fan’s impression with her reply which reads ;

Ew. Why do people think this ? Lol all we do is watch netflix, touch lips and laugh at people on twitter 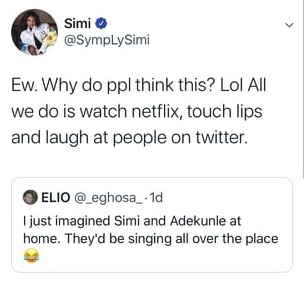 Simisola “Simi” Ogunleye recently tied the knot with her colleague, Adekunle Gold. From keeping their relationship discreet to having a private engagement and wedding, Simi recently revealed some private details including how they met. Read HERE

The singer recently confirmed rumors of being Pregnant after performing on stage with a protruding belly.

Popular Nollywood actress, Anita Joseph has reacted after trolls predicted the end of her 4 months marriage. According to them, her marriage...

Anthony Joshua Opens Up On His Challenges In Finding True Love