95
SHARES
178
VIEWS
Share on FacebookShare on TwitterShare on Whatsapp

Nollywood actress, Angela Okorie, has reportedly been hospitalised after an attack by Gunmen who shot at her car on December 12, 2019 .

According to blogger Stella Dimoko-Korkus, the actress’ car was also riddled with bullets – All these happened after she ran into armed men after coming back from a show It seems to be a time of red in the Nigerian entertainment industry going by the negative news trailing some celebrities.

According to reports, the actress is hospitalised and her car has been riddled with bullets. Popular blogger, Stella Dimoko Korkus reported that the incident happened after the actress ran into armed men on her way back from a show on December 12, 2019.

Angela’s Mercedes Benz SUV was seriously vandalized with bullets and the interior of the car was filled with broken glasses following gunshots in the undisclosed location where she was attacked.

We have now obtained photos of the actress covered in blood after the attack that almost claimed her life. Angela Okorie looked battered and shattered in the photos, her face swollen and her left eye appears to have temporarily shut down. 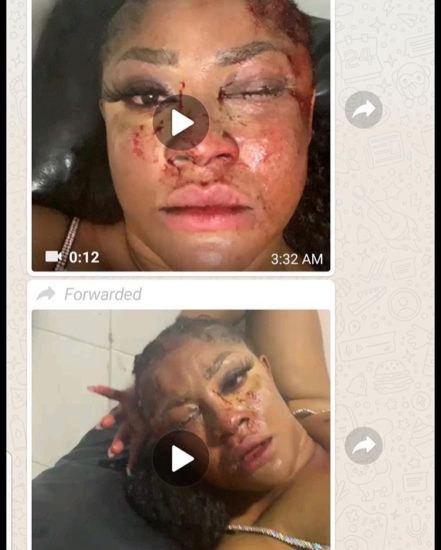 ‘My Sickness Is Spiritual’ – Veteran actor, Pa Kasumu Opens Up